AHA News: After a Stroke at 26, Determined Athlete Fights Back 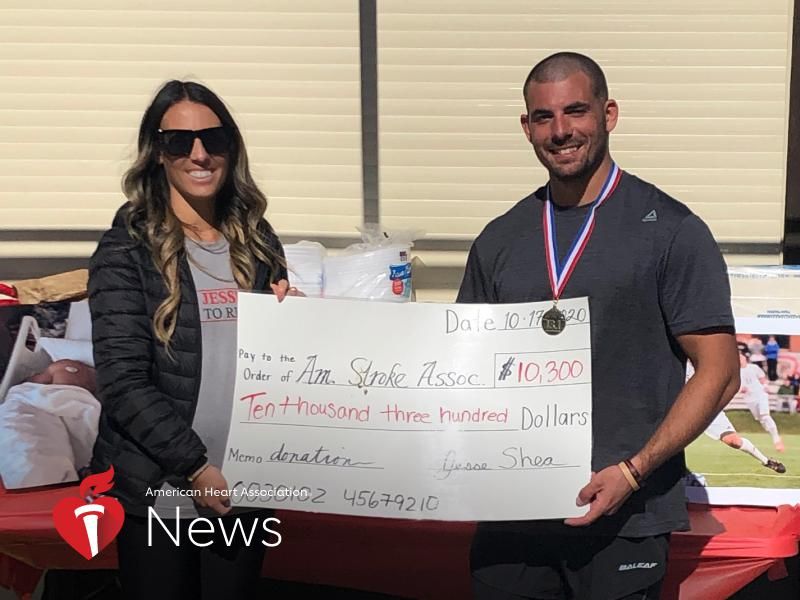 Jesse Shea felt a little cloudy when he got up for work on a Monday. He chalked it up to being out later than usual to watch football with friends.

Jesse drove to the dock in Cape May, New Jersey, where he worked on a tugboat for a salvage operation. It was a demanding job, mentally and physically. But at 26, Jesse, a former college soccer player, was in the best shape of his life. He lifted weights daily at his local gym and watched what he ate. He had a bachelor's degree in nutritional science.

On the drive to work, his head felt heavy. When a friend called, he tried to speak but couldn't. It must be morning throat, he thought. He hadn't spoken to anyone yet that day.

At work, Jesse went to put on his waterproof overalls. Except, he struggled to walk to where they were hanging. Then it took longer than it should've to put his legs in each side.

He went to untie the tugboat, but couldn't remember what to do.

A co-worker on another boat nearby noticed and shouted, "What's going on?"

Jesse had no idea.

He took a gulp of water, but it dribbled out of his mouth. He couldn't ignore the signs any longer.

"I think I'm stroking out," he texted his co-worker on the nearby boat.

Jesse didn't even know what that meant, but it was the only explanation that came to mind.

He took a few photos of his face and looked at them. His right side drooped. Then he realized he couldn't raise his right arm.

In a panic, he managed to call his father, but could only cry.

In the emergency room of the closest hospital, doctors surrounded Jesse, asking him basic questions: "What's your name? What year is it? Who is the president?"

He didn't know the answers.

Tests confirmed a blood clot in his brain. But they didn't know what caused the stroke. They gave him medication to try clearing the clot and monitored the response.

That night, Jesse could barely move his right arm and couldn't move his fingers at all. Luckily he is left-handed. He could swallow only if he concentrated. He had some movement in his right leg and could walk with assistance.

A few days later, his older sister, Alex Shea, was on her way to the hospital when she called to see if her parents or other two siblings – all of whom were spending long hours by Jesse's side – needed anything.

"I was expecting to hear water or coffee," Alex said, "but Jesse had been saying the word 'basketball' for hours."

She stopped at a store and bought three sizes.

"Jesse took the small one and spent the next eight hours trying over and over to pick it up and throw it," she said. "At first, he couldn't even grasp it. By the end of the night, he was throwing it."

Jesse's parents had him transferred to a more specialized hospital in hopes of finding the source of the stroke. They couldn't. About 1 in 4 clot-caused strokes in the U.S. are classified as "cryptogenic," meaning no known cause can be identified.

Jesse received physical, speech and occupational therapy for a few months. He did much more on his own.

"A couple days out of the hospital, I was begging someone to bring me to the gym," Jesse said. "For the first six months, if I was awake, I was rehabbing."

The owner of his gym let Jesse work out for free. A fellow gym member, Jerry Griffin, heard about Jesse and wanted to help because he'd been through a similar ordeal. He helped Jesse learn to walk again and how to do things like swing his arms when he walks.

For all his progress, Jesse couldn't return to his job. He also struggled to regulate his emotions, often feeling either too emotional or not emotional enough. He had daily headaches and occasionally had symptoms that mimicked a stroke, sending him back to the hospital for days at a time. The swings affected his motivation.

Then he met his new best friend: Sampson, an English mastiff, the same breed his family had when Jesse was a kid.

"I never had my own dog or puppy," he said. "Suddenly I had to take the dog out every 20 minutes. That got me going."

"His message is, you can always come back from something. Everyone goes through bad times," Jesse said.

He no longer had the fine motor skills he needed for soccer, so he turned to distance running.

This past November, only one year after his stroke, he ran a virtual half-marathon and raised more than $10,000 for the American Stroke Association. Dozens of friends cheered him on, with a party at the finish line.

What is a stroke? See Answer

A few months after running 13.1 miles, Jesse completed a challenge that required running 4 miles every four hours for 48 hours – a total of 48 miles over two days.

Despite these impressive feats, Jesse is hesitant to declare himself recovered. He knows he's not the same person he was before the stroke.

"I had a general sharpness and now I'm just not as crisp," he said. "But I feel like I'm improving every day."

No Drop in Teens' Use of Pot, Binge Drinking Despite Pandemi...

When, Where Was the First Case of COVID-19?

© Bipamerica Newswire 2023. All rights are reserved